It has been already a week in Morocco. However, just today I experienced cultural shock. 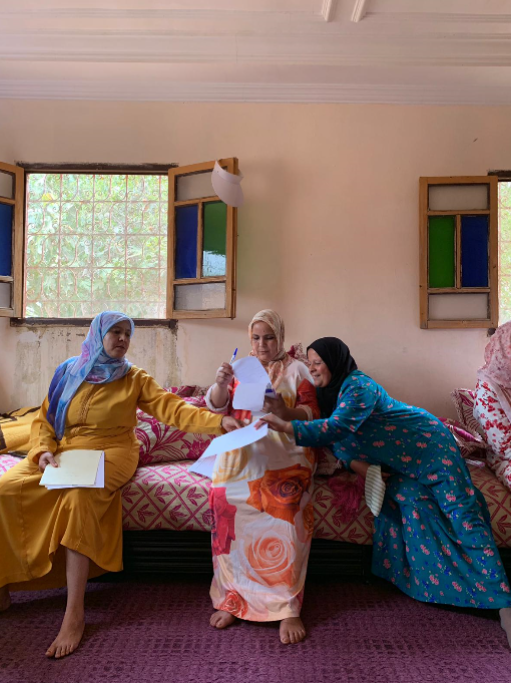 Wednesday, at 8:54am, we came to the Hight Atlas Foundation office all prepared for today’s workshop. At the doors, a young intern named Layla welcomed us and she started to describe the main assumption of the workshop.
Today’s workshop is a part of four-year project aiming to empower women in Marrakesh and nearby villages areas.

While waiting for the rest of the interns, the girl told us about local realities and main problems that women need to deal with. If you were born as a woman in the village in this area you will find many difficulties with the access to higher education. From this point, after finishing elementary school women tend to focus their lives on getting married and staring a new family. Now, while entering the room of the village house I saw about 15 females around their 40s talking about their experiences related to being a wife and a mother. I am amazed with all the colors that were overflowing the room. All their colorful dresses on the background of pink-golden sofas made the room look as a really happy place.

A big white board filled with questions hung in front of the sofas. Layla started to translate the main topics that are going to be discussed. One of the questions appeared on the board: “Do you love yourself and is the love enhanced after today together?” could be a good summary of the day, with its objective to raise women’s awareness about their mental and physical health. If the answer to this question would be yes, the goal of those days would be reached.
While talking about common problems, women realize that they are facing some similar issues regarding what makes them feel better about their worries and what enables feeling better about oneself.

My favorite part of the workshop was the described by Layla as “physical exercise”. Suddenly, the discussion stopped, the host of the house stood up, staring to sing loudly and dance. After few minutes, almost all of them were dancing in the middle of the room. I was really impressed by what I saw.  I can honestly admit that the moves and singing abilities of some of them were better than some of nowadays well-known pop stars. I feel ashamed that after ten years of taking dance classes I am not able to repeat their hips moves. Just at that moment, seeing them dancing, enjoying the moment I could see how powerful they actually are. I found incredible how does the Wednesday afternoon can all of a sudden change into some beautiful celebration of femininity. Living in the Eastern part of the Europe does not familiar you with this kind of behavior. Trying to imagine my mom, aunt or grandmother in this situation seem to be an abstraction for me. I started to wonder how successful they could be if they would have been born in a big city. Does it mean that their identity would be changed? Would they still be as powerful? Maybe one thing come at the cost of something else.

At the end of the day I was introduced to a daughter of one of the precipitants that was hosting the event for us. Amira was just 19 years old, married at 16 and divorced at 18.

After a short talk with her and goodbye with the other participants, we departed. We were on our way back to the city.

“I Love Writing My Name”

Hajiba Boumasmar HAF intern The exclusion of illiterate women from the community was the motive for fighting against illiteracy. Today - accompanied by Amina, HAF’s Director of Projects,…

Georgina Kenchington HAF Volunteer No matter where you are in the world, it’s (nearly) guaranteed, unless something has gone horribly wrong with the solar system, that every evening…