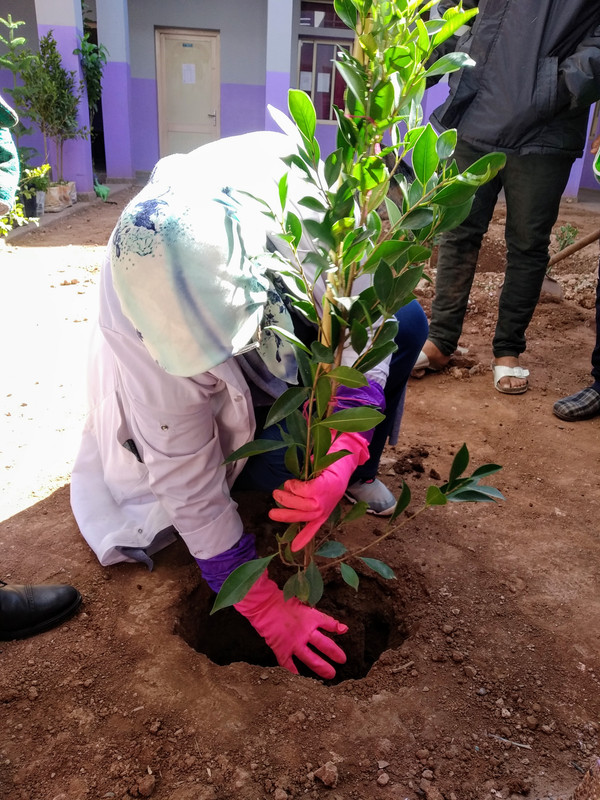 On February 26th, we, two French interns, went with Imane to the Mohammed Abed el Jabiri dar Essalam secondary school that is located on the outskirts of Marrakech. There we met the biology teacher, who welcomed us warmly. Inside her laboratory, we carefully observed the student’s pieces of work that are both posters and constructions representing, for instance, a volcano, the fertilization process, or a human jawbone. The teacher explained to us that all of those works were made by the pupils in their free time as homework. However, she provided them with the tools and materials so that no one was at a disadvantage.

To me, it is very appealing to give pupils the opportunity to be responsible for their own education. By creating objects, posters, and infographics, the students learn more effectively than if they were listening passively. This allows them to develop their creativity and by the process of doing, to enjoy making it and be proud of what they’ve achieved. Posters made by the students were hung in the schoolyard and described fruit trees. This is where the workshop took place.

The director of the school, two representatives of the AESVT (Association des Enseignants de Science et Vie de la Terre), Mr. Belhand and Mr. Abdelghani (director AESVT Marrakech), as well as Mr. Houari from the Observatory of the Palmeraie of Marrakech offered a few words and planted the first tree before giving way to Imane.

In a circle, we held hands and Imane tested the pupils’ attention. After that, the workshop came to life with informed and involved secondary school students. Almost all the students took part so that the answers came flooding in. Everyone was shown appreciation by the applause throughout the rest of the assembly. And it was with great enthusiasm that the group headed to the chosen spot to plant the much-valued trees!

And on February 27th, we repeated the workshop but in another secondary school. The “Collège Sâada” is located a few blocks away from our previous workshop. What struck us at the first sight were the artistic works standing in the schoolyard. Every one of them was made by the pupils or former pupils. As we arrived at the school, we could see students working on cardboard-made guitars and another group working in the school’s garden. The students are growing their own lentils, carrots, chickpeas… with barely any knowledge about planting and growing vegetables. But the vice president tells us that they are learning from their mistakes. The biology teacher has already installed a drop-by-drop system to water the crops. Most of them are drought tolerant plants in order to be adapted to the arid soil and the low precipitation conditions.

The involvement of the students in the school’s cultural life is very appealing, and the staff’s efforts in bringing life to this place are noteworthy. In the classroom where the workshop took place, a theatre teacher comes voluntarily to help the students and teach them how to act.

According to the President of the environmental club of the school, Mrs Khadja El Kenani, the students of the school come here even when they don’t have any class because they have nowhere else to go, and this place allows them to develop their creativity and have fun. Through this pleasant atmosphere, the workshop unfolded well. Thanks to the students’ workforce, the children planted a symbolic olive tree in an empty space of the school where other trees will be planted in a near future.

In those two schools, the opportunity is given to the pupils to collaborate and create sculptures and posters out of raw materials. That encourages them to think by themselves, rely on very basic tools to explain on the one hand the complexity of the human body and on the other hand to decorate the schoolyard with music instruments or animals. Those creative works get the students and teachers together, making the students proud and the school honored to receive such artistic works. Eventually both sustainability and art are embodied in those community-made pieces of work and school gardens. And this is just a glance at two well-rounded schools on the outskirts of Marrakech. Pupils’ creativity must be encouraged as well as their self-confidence because art is sustainable development’s best media. As global warming is already happening, we have to adapt to our changing environment, and all the creativity we can get from the younger generation will become worthwhile. MY VISIT TO ROBERT BOSCH COLLEGE IN FREIBURG

President of HAF Last week I had the immense pleasure of visiting the UWC Robert Bosch College (RBC) in Freiburg, Germany. RBC is replete with global diversity, with…