Helping to Build a Vision for a Better Future

To maintain a successful scaling strategy for empowering Moroccan women on a national level, HAF invests in its staff to build their capacities and to expand the organization’s number of facilitators. After the completion of her “observation phase” as an empowerment facilitator apprentice, HAF’s Project Director Amina El Hajjami scheduled a workshop to practice her skills on the 4th of April, 2019 in Al Haouz Province—a region in which HAF has extensively worked with local communities to implement development projects. Amina, accompanied by a HAF U.S. board member, Ms. Martine Roberts, two female Moroccan volunteers, Sanae Benaadim and Houria Chouhab, and myself, Lead Empowerment Trainer, arrived in the rural village of Talaaint. Forty-six Moroccan women aged between 16 and 60 attended the empowerment training, titled Imagine.

Initially, we were planning to conduct Imagine in accordance with its structured format; however, we were taken aback by the participants’ silence. Eventually, their evolving understanding that the training is a unique opportunity with the potential to lead to life changing achievements broke their hesitation. For example, first, explaining the concept of “training” took more time than we expected. However, using the local language and implementing the brainstorming method helped the women to start thinking, trust their answers, and to therefore become confident in publicly sharing their thoughts. We, as Imagine facilitators, have found that asking questions plays a great part in women’s understanding of concepts as well as their ideas and individual ways of thinking. Further, it provides them with an opportunity to express their specific desires, goals, and needs.

One of the participants shared, “If we ever attended school, we would not have been silent, and we would be able to express ourselves well.” Another participant said, “It was time to change our habits.” During their conversations, women used the word ‘tighri” several times, which in the Amazigh language Tashelheit means “learning.” They deeply believe that tighri is essential and could be the means to change both their livelihoods and status within their families and communities. Moreover, it could foster their development in becoming decision makers, which would consequently help them flourish as individuals. This open debate led the participants to speak about how they have looked at themselves regarding their roles within the family and, in addition, revealed their inner fears.

One woman said, “I really want to get rid of the chains and the limits that were imposed on us, but I feel that once women sign the papers of marriage, she sells herself to her husband who becomes the only one responsible for her. Thus, he decides on her behalf and she cannot even travel alone or exit the village without his approval, even during emergencies such as sickness of their children.” 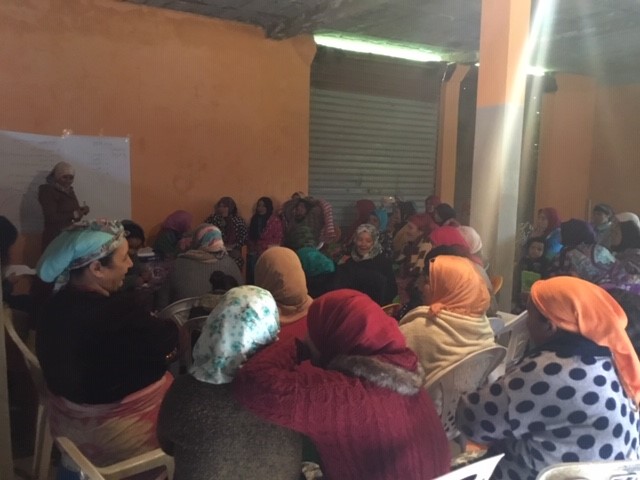 To encourage the engagement of mind, emotion, and spirit, different tools were used including the meditation exercise, or what we call the “room exercise.” We explain the existence of meditation in Islamic nations, emphasizing that meditation is in fact an integral part of Islam. Specifically, the Prophet Muhammad, peace be upon him, was well known for his meditation practice. It was during this practice that he first received Qur’anic revelation. Thus, meditation opens the door of revelation, making it essential to spiritual development. For instance, when we facilitate a workshop with devout communities, meditation exercises are important simply because it is centered on oneself, helping one listen and feel for what feels truly right on a personal level. 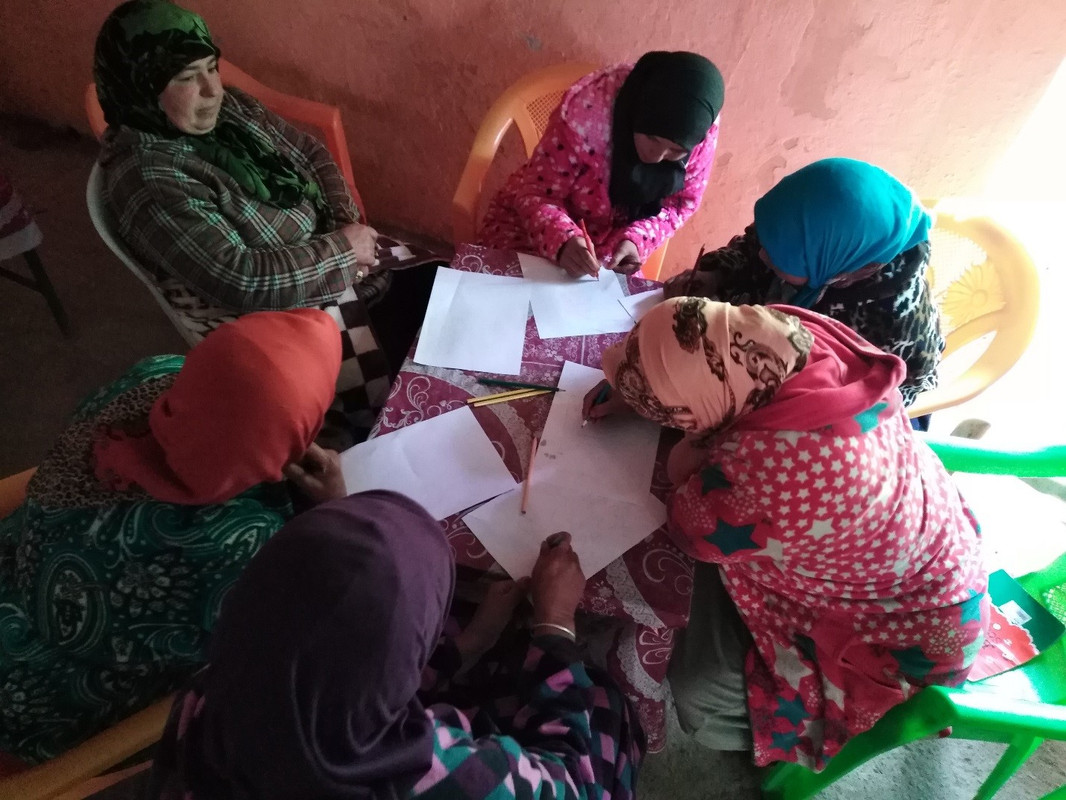 Usually, women enjoy this exercise because it helps them relax, deeply reflect on themselves, and to discover their inner resources and own truth.

In regards to Guided Visualization, I have noticed that imagination is perhaps the most underutilized resource for many participants, but when they expand and unleash their imagination you discover it is more important than their knowledge. Imagination is not limited and so, through it, participants can reveal and express their visions through drawing. At this time, innovation and creativity transpire and women’s abilities will positively transform their own life and their communities. Notably, sharing feelings and discussing problems is part of the Moroccan culture.

Openness can be very emotional, however, so splitting the group into small groups or pairing participants allows for easier conversation. For many women, to be open and comfortable to express their feelings, opinions, and ideas helps build trust between them.

It Rains Empowerment in Talaint

By Houria CHOUHAB HAF Volunteer On the 4th of April, a team from HAF conducted a four days workshop in Talaint, in the Setti Fatma Commune. It was…